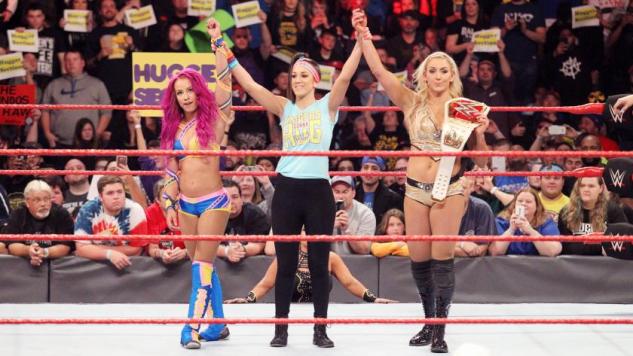 The Diva’s Revolution officially kicked off in 2015 but don’t let anyone fool you. The real Women’s Revolution is here in 2017! This year we’ve seen historic highlights such as:

Before I get to my 3 ways to lift the women’s division, let’s take a look at who exactly we’re dealing with. Since the Brand Split in April 2016 we’ve seen Raw and Smackdown Live build new stars in the women’s division. Little Miss Bliss and Naomi are currently holding their respective brand titles. We’ve seen some amazing feuds between Charlotte and Sasha Banks, Charlotte and Bayley, Alexa Bliss and Becky Lynch, Alexa Bliss and Naomi, etc. etc. The list goes on. What did you notice in my previous sentence? That’s right. Lack of diversity. WWE has tons of talent to work with in the women’s division, yet they don’t expand on it. Why is that? Most of the blame falls on WWE splitting up the division on RAW and Smackdown Live. When you break down the women’s roster in WWE currently it looks like this.

*Currently injured or on leave

We have 15 active women on the WWE roster. 18 if we include Nikki Bella, Paige, and Summer Rae. As it breaks down right now we have 8 on RAW and 7 on Smackdown Live. With a roster that light things can get stale after a while. So that’s why…

By unifying the women you instantly introduce countless new story lines. You get a chance to explore throughout the roster and see what you really have. As I stated earlier, seeing the same 2 matches week after week gets stale. With a unified roster that issue gets resolved instantly. The division would be exclusive to RAW in efforts to help with the dreaded 3rd hour. Most weeks we get that halfway hangover where things just take a bit of a dive before the climactic main event of the night. Take this time to show off the division. Having 4 matches a week on RAW along with bringing out the superstar’s personalities is something I as a fan have been screaming for. This is how you build bonds with superstars. The fans need to get to know these people. Have a reason to root for them besides just who’s a face and who’s a heel. WWE tries to expand on this via social media but it still doesn’t hit home the same way. Now you may be wondering how we determine the new WWE Women’s Champion, right? Taking a page from the Mae Young Classic, RAW will host a single elimination bracket style tournament for the brand new WWE Women’s Championship belt. The current RAW and Smackdown Live champions will be granted top seed in their bracket. The matches would take place on RAW for 3 weeks and the Championship Match would take place at Survivor Series.

Once the Women’s Championship tournament concludes, we’ll shift focus to the newest belts in the business. The WWE Women’s Tag Team Championship! Adding tag team belts to the division brings much more credibility and diversity. This allows for factions and alliances to actually matter in WWE besides the typical heel vs face matches. Giving the division tag team belts is the perfect under card belt. It allows WWE to try new angles and give some superstars the chance they weren’t receiving before in their singles run. You’re in denial if you don’t want to see Alexa Bliss and Nia Jax (Team Rude) taking on Charlotte and Becky Lynch.

The final and perhaps biggest push to bring the division to the next level is by finally pulling off the first ever Women’s Royal Rumble Match in 2018. A field of 20 will take to the ring and battle it out to be the number one contender at Wrestlemania for the WWE Women’s Championship. As we’ve seen already, the women have headlined a PPV (Hell in a Cell), continue having headlining matches on RAW and SDL, and taken part in the first Women’s Money In The Bank ladder match. It’s now time to bring it all together for this massive rumble match which all culminates to the 20th entry of the rumble. Asuka! Can you make a bigger statement than that? I think not! What better place for the reigning NXT Champion to make her main roster debut and send the WWE women’s division to main event levels.